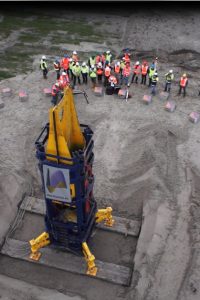 November 2014 Allnamics performed Rapid Load Testing on test piles for the foundations of two wind turbines near Urk in The Netherlands.  Earlier Allnamics had performed PDA while these piles were driven into the ground.

This test was the first application for the 8 MN StatRapid after returning from a two year stint in Singapore and Malaysia, during which it was used extensively.

With a drop weight of 40 tons the 8 MN StatRapid can generate the equivalent of an 800 ton static load.  As the drop weight lands on a set of special springs, the loading characteristic is such that the pile behaves quasi-statically.  Consequently the analysis of the test results is relatively simple and the outcome is not subjective, that is it does not depend on the person analyzing the test results, which is not the case for dynamic load testing.

Several tests around the world have shown that Rapid Load Test results correlate very well with those of a Static Load Test.  Setting up the equipment, performing the test with multiple loading cycles and taking the equipment down takes less than one day, and depending on the local conditions up to 4 piles can be tested in a day.

If you need additional information on StatRapid, please feel free to contact us. 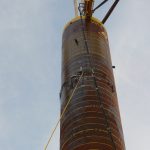 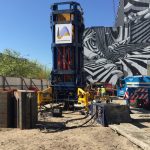 Rapid Load Test in The Hague for the Sonate Adagio Buildingprojects