The Riffgat Wind Farm project is located on the North Sea near the German island of Borkum and comprises the installation of 30 steel mono-piles on which 30 windmills will be placed. The mono-piles weight between the 480 and 720 tonnes, they are between 53 and 70 m long, with a diameter of 4.7 m at the pile top and between 5.7 and 6.5 m at the pile tip.

As a spin-off from the successful vibratory driving project at the Hong Kong-Zhuhai-Macau Bridge project, the contractor Seaway Heavy Lifting chose the option of using a vibratory hammer for the installation of the mono-piles. By choosing this innovative installation method, they could adhere to the strict environmental rules which apply in Germany and keep the environmental impact due to noise and vibrations within acceptable limits. Using the traditional piling techniques with conventional hydraulic hammers would result in noise levels that would cause major damage to marine life. Another advantage of vibratory driving is that the pile can be repositioned easily when the initial installation angle is too large, as was experienced during project execution.

The contract for the Vibro-hammers was awarded to APE-Holland, who developed a modular hammer, the Super Quad Kong (SQK), specially developed for this offshore project. APE Holland cooperated on this project with Allnamics, who carried out the drive-ability studies with AllWave-PDP for the mono-piles.

After driving the first mono-piles it was clear that the capacity of this modular hammer was more than adequate: for the first piles in sandy soils as only 50% of the total power of these hammers was required, and it was possible to drive these mono-piles to a penetration of 31 meters in one run. However, the Riffgat project also has locations with strong clay layers, and the excess vibratory power will be needed to drive the pile to a stable position with those soil conditions.

Since the owner of the field required a blow count as an indication of the bearing capacity of the pile and since there was a concern of soil strength degradation by vibratory driving, the last 10m of the piles still had to be driven with an impact hammer (using an IHC S-1800 hydraulic hammer). As part of the driveability studies, Allnamics indicated that this was a rather conservative approach, and this opinion was supported during actual driving by the fact that the pile at the start of driving with the impact hammer showed a blow count of 100 blows/25cm with an impact energy of 1200 kJ, which clearly demonstrated a strong recovery of the soil strength after vibratory driving. Moreover, before the hydrohammer could be applied, a Noise Mitigation System (NMS) had to be put around the pile, which clearly showed the difference in environmental impact between the two types of hammers.

Because the driveability predictions showed potential refusal before the target depth was reached it was decided to perform a small scale vibratory driving test at the clay locations and to instrument the pile with strain and acceleration transducers near the pile to perform Vibratory Driving Analysis (VDA). The VDA results have been used to tune the drivability studies for the mono-piles. 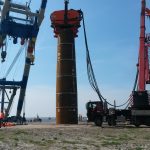