The Second Penang Bridge will act as the second crossing link from Penang Island to the western coast of the Malaysian peninsula. The length of the marine bridges is about 16.5 km and they will be supported by piled foundations, including steel pipe piles, cast-in-situ bored piles and spun piles.

In November 2006 the Malaysian Government signed a contract with UEM Group for the construction and management of the bridge, which is being built by CHEC (China Harbour Engineering Company) in cooperation with UEM Construction. Jambatan Kedua supervises the construction, management and operations of the bridge. To confirm the design assumptions a pile testing program including static and rapid load testing was performed. The Rapid Load Testing was performed by the company Geonamics using a range of Statnamic devices, and the analysis and reporting of the test data was performed by Allnamics between 2010 and 2011.

The test results were interpreted in accordance with the Dutch Guideline CUR 230 (2010) for the interpretation of Rapid Load Testing, which offers two interpretation methods depending on the soil type:
A method for piles in sand, gravel, silt and piles on rock: a simplified version of the unloading point method (UPM), originally developed in the Netherlands.
A method for piles in clay: a simplified version of the Sheffield method (SHM) originally developed in the U.K.

According to this guideline, the load on the pile can be considered a “rapid” load if the duration of the load is at least 10 times the time it takes for a stress wave to travel from the pile top to the pile toe or as a formula:

where Tf is the load duration, L the pile length and cp the stress wave velocity in the pile material. If this condition is not met the pile load tests cannot be analysed using the top signals only. In such cases additional analysis is required using the Segmental Unloading Point Method (SUPM) with strain measuring transducers placed at different pile levels inside the pile. However, for this project SUPM was applied whenever additional instrumentation (using Global Strain Extensometers) was provided.

The Global Strain Extensometer (Glostrext) technology consist of a deformation monitoring system that uses advanced pneumatically anchored extensometers coupled with high-precision spring-loaded transducers, and a novel analytical technique to monitor loads and displacements down the shaft and the toe of foundation piles. The technology enables installation of instrumentation afterpile-driving and thus virtually eliminates the risk of instrument damage during pile production and installation.

The piles tested were spun piles, steel tubular piles and bored piles. The largest pile tested was a bored pile with a diameter of 2.3 m and a length of 125 m. A test load of 65 MN was applied to the pile top and Glostrext transducers were installed over the full pile length.

The use of the Glostrext technology allowed for the monitoring of the strain at several positions along the pile shaft. It should be noted, however, that to convert the measured strains to segment forces the modulus of the elasticity of the concrete and pile cross section at transducer locations have to be assumed, which introduces an interpreter dependent component in the SUPM analysis.

The results of the pile testing program proved that the design assumptions were correct and that the piles were able to transfer their top loads to the bearing layers within the requirements for settlement and ultimate capacity. 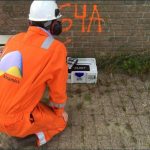 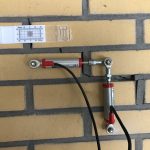