As part of the development of the railway zone in Breda, Aannemersbedrijf Van Agtmaal BV is constructing a new building with a basement for Client Thes. The six-story complex will include studios, apartments, townhouses, and commercial facilities.

Volker Staal en Funderingen installed TVSI piles for the foundation. Brem Funderingsexpertise BV has checked the piles with Sonic Integrity Testing. Several piles showed a signal reflection directly under the pile head reinforcement, a well-known phenomenon with cast in-situ piles with pile head reinforcement. In general, it is believed that a possible crack will be closed under compressive loads. In that case, piles can be suitable for transmitting compressive loads to the bearing layers. To verify this, it was decided to carry out load tests.

StatRapid is ideally suitable in this case because several piles can be tested in a short period with limited preparation. StatRapid (a form of Rapid Load Testing) is described in ISO 22477-10:2016. In collaboration with Brem, Allnamics subjected three piles to a load test in accordance with class D of NPR7201:2017.

The results of the tests showed that the shafts of the piles could transfer the load to the bearing layers. This result has restored confidence in the foundation, and the construction work can be continued. 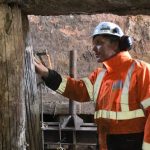 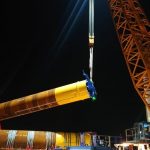